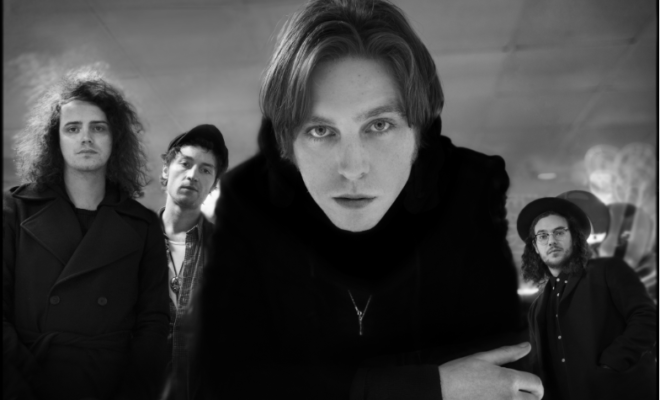 Catfish and The Bottlemen Announce “The Balance” Album Details

The wait is almost over! Catfish and the Bottlemen’s third album, The Balance, will be out Friday, April 26th. The album is now available for preorder HERE.
In the breaks between electrifying outdoor and festival shows in 2018, Van McCann (vocals, guitars), Johnny Bond (guitars), Robert “Bob” Hall (drums), and Benji Blakeway (bass)retreated with Irish producer Jacknife Lee (U2, The Killers) to carefully craft The Balanceover a 12-month period. Recorded in seclusion at two locations – Grouse Lodge in Moate, Republic of Ireland, and The Chapel in the countryside of East Lincolnshire – the band lived and breathed the album while residing together in rural isolation. The album was mixed by Craig Silvey (Florence + the Machine, Arcade Fire).
“We loved living in the same place,” says McCann. “We were staying there the whole time, so we were waking up around each other and working until we needed to go to bed.Jacknife was always up. He was the first up and the last awake. It’s good when you’re completely engulfed in recording in a place like that, living together, because every day and all day it was about the songs. We had fun too; they were the funniest album sessions we’ve done.”
The eleven-track album features the new single “Longshot,” which has amassed over 6 million global streams since its release, as well as the live fan-favorite “Fluctuate.” Fans will be able to hear these new songs live on the band’s upcoming U.S. headline tour which kicks off March 12th. Tickets are available HERE.
THE BALANCE TRACK LISTING:
1. Longshot
2. Fluctuate
3. 2all
4. Conversation
5. Sidetrack
6. Encore
7. Basically
8. Intermission
9. Mission
10. Coincide
11. Overlap
CATFISH AND THE BOTTLEMEN – U.S. TOUR DATES:
3/12 – Indianapolis, IN @ Egyptian Room at Old National Centre
3/13 – St. Louis, MO @ The Pageant
3/15 – Houston, TX @ House of Blues – Houston
3/16 – Dallas, TX @ House of Blues – Dallas
3/18 – Phoenix, AZ @ The Van Buren
3/19 – San Diego, CA @ House of Blues – San Diego
3/22 – Los Angeles, CA @ Hollywood Palladium
3/23 – San Francisco, CA @ The Fox Theatre
3/25 – Portland, OR @ Roseland Theatre
3/26 – Seattle, WA @ Showbox SoDo
3/28 – Salt Lake City, UT @ The Depot
3/29 – Denver, CO @ Ogden Theatre
3/31 – Kansas City, MO @ Midland Theatre
4/2 – Columbus, OH @ Express Live!
4/3 – Brooklyn, NY @ Brooklyn Steel
Related Itemscatfish and the bottlemen
Jacklyn