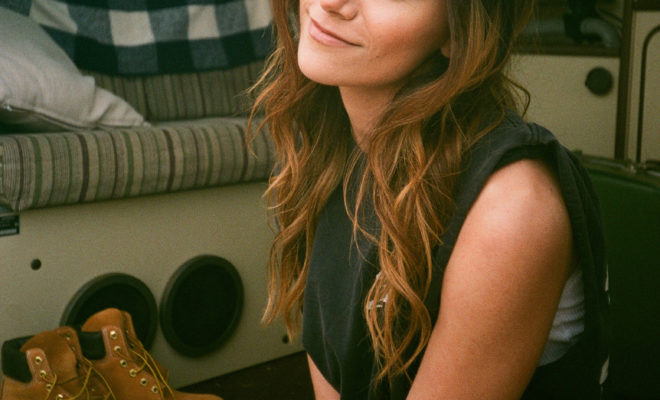 Although last year seemed to be the year of change for Alyson Stoner, with the 25-year-old coming out in a Teen Vogue essay and releasing music independently, 2019 seems to be the year she completely starts over.

Honestly, starting the draft of this piece, I had a lot to say. About how big of a fan of Alyson’s I am. About how I’ve been a fan for years, watching all her films and TV shows, and listening to her music. About the beautiful messages of openness and authenticity she’s been spreading lately. But this all seems unimportant after watching the video she just released for her latest single “Stripped Bare”.

Directed by Youtube creator Shannon Beveridge, the video stars Stoner watching old cassettes tapes of childhood memories before packing a suitcase and driving away in a van. Her only companions? A suitcase full of these cassettes and an old camcorder with which she captures herself leaving it all behind without looking back. An anthem to starting over after a complicated childhood that may hit home for many, like it did for me.

After being very private and quiet about it, Stoner admitted to People in their most recent issue all the struggles she faced as a kid under the spotlight. She shared dealing with trust issues, but also a lot of health issues such as eating disorders and severe anxiety, which eventually led her to seek professional help in 2011 at age 17.

Leaving rehab was the moment Stoner started working towards taking back control of her life, her story, and her career, and this song perfectly captures that. By the end of the video, Stoner is seen singing about “cutting the strings,” while burning the tapes, and chopping off all the hair in what the singer called “an act of mental health and confidence, not self-destruction.” Stoner shared “I can’t tell you how many beliefs and opinions and insecurities fell to the floor with every tuft of hair, and I’m leaving them there. I’m shedding one era and rising as a new being in real time.”

And one thing I can tell you, is that I’ll be there for this new Alyson era.

Tomorrow 9AM I release my music video for Stripped Bare. Honestly, I’m exhausted… from vulnerability, from trying to make you excited or click the link in my bio because I poured everything into this… Stripped Bare is not just a song for me. It’s a line in the sand and a personal commitment to change my future direction, no matter how daunting and unclear. To allow old, familiar things to die and kill off the ego that keeps me fixated on the rear-view mirror, even when nothing beautiful is coming from it. Everything changes tomorrow. And, you’re welcome and encouraged to stay for what’s coming. ✨ Though social media sometimes rewards the loudest people, I’m done shouting. Stripped Bare is a good song, add it to your playlists. The video is great. Watch it tomorrow, 9A. It may be the last… ✌🏽