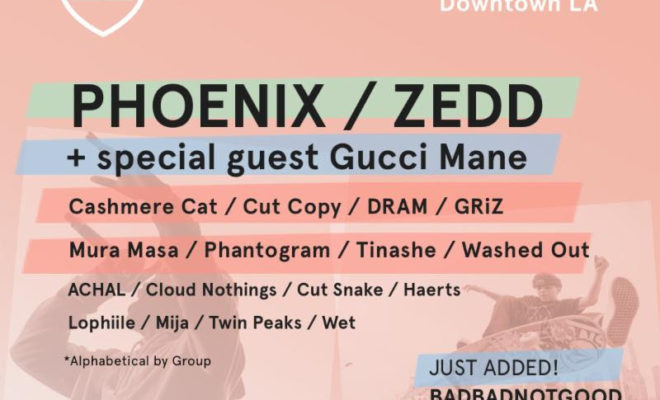 Phoenix and Zedd, along with Gucci Mane, will headline the fourth-annual Air + Style Los Angeles. Part music festival, part skateboard and snowboard competition, the festival will take place March 3,4 in Exposition Park at the Los Angeles Coliseum. 2-Day General Admission Tickets ($149) and 2-Day VIP Tickets ($239) are on sale now at www.airandstyle.com. For the firs time, the festival will include skateboarding as part of the program.

Festival founder Shaun White who is currently preparing for the 2018 Olympics in South Korea next month says “I can’t wait to come home from the energy of the Olympics to Air + Style Los Angeles. The festival is a combination of all my passions sport, music, art and culture and the fact it happens in my home state of California and in Downtown LA, makes it even more special.”

Zedd, Phoenix, Gucci Mane, Cashmere Cat, Cut Copy, DRAM, GRiZ, Mura Masa, Phantogram, Tinashe, Washed Out, BADBADNOTGOOD and more will join the stacked bill of 20 bands performing on two stages. Air + Style will deliver both an elite snowboard and skateboard competition throughout the two-day event, where some of the world’s most revered athletes will compete including professional skateboarders Pedro Barros, CJ Collins and Cory Juneau and professional snowboarders Zak Hale, Louif Paradis and Anto Chamberlin. For non-competitors Big Bear Mountain Resort will be there with ‘Learn to Ride’ – allowing festival goers to experience snowboarding first hand and additional experiences will be offered with skateboarding. Watch this space for the full sports program being announced soon, including an additional on-course music line-up.

Air + Style Los Angeles is a family-friendly event that welcomes music and action sports fans of all ages. Children 10-years-old and younger will be admitted free of charge with a ticket-holding adult.