5 Reasons Slam Dunk Is The Best Festival In The World

Slam Dunk Festival may well be a UK independent festival; but that doesn’t stop it from garnering attention around the world. In fact, it may well be THE most talked about in certain communities, well, ever. No, we don’t have any proof, but have you seen that line up? If you’ve even got a SLIGHT hint of taste in the rock and alternative music scene, you’ll be wishing you could attend – no matter where you live. 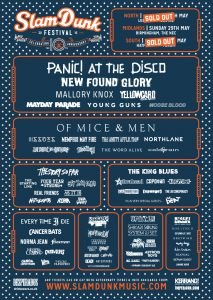 LOOK AT IT. IT’S A THING OF BEAUTY.

Whether you’re into good old pop-punk, pizza parties and gang vocals, or something altogether rowdier like metal to the MAX, Slam Dunk doesn’t disappoint.

The festival started out with fairly modest beginnings, and as grown to be one of the most recognisable in certain circles worldwide. This year marks the tenth anniversary, and the lineup includes everyone from the giants right through to those bands getting a buzz who are just starting out. The festival LITERALLY takes over the city of Leeds these days, as well as two other places in the Midlands and the South. Fans can choose one date, two… or even all three.

Yep, it’s kind of a big deal. By taking smaller names and putting faith in them to grace their stages, Slam Dunk can literally kick-start the band’s career. Other festivals often sit up and take note once they’ve done well over at Slammy-D in the UK, and very often the reason you’re seeing bands at Warped Tour and other places is because they’ve proven themselves here first.

For an industry which appears to struggle more and more year on year, Slam Dunk helps keep the passion alive. Thanks to its chilled out vibe, summer positioning (typically over that one sunny weekend the UK gets a year), and copious amounts of alcohol, it keeps people of all ages returning again and again; not just the teenagers. It’s cool for every demographic, therefore it’s cool enough for you.

Okay, so this one isn’t really a reason, it’s more of a truth. It’s become a staple for British misfits, and the word is spreading around the globe, too. If there was ever a time for a musical pilgrimage… this is it!

For tickets and more info, hurry to the Slam Dunk Festival Website