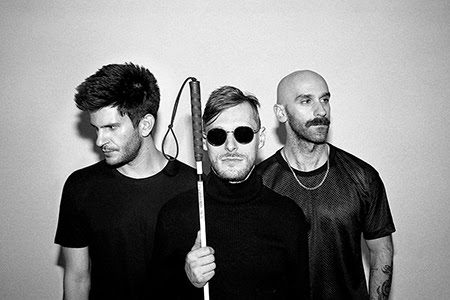 X Ambassadors release their latest future smash hit “BOOM”.  “BOOM” was co-written by X Ambassadors and produced by Ricky Reed (Twenty One Pilots, Leon Bridges). “BOOM” was selected as the music bed for the NBA primetime games on ABC. The single will appear on the band’s forthcoming album which is set for release later this year.

Visceral and instinctive, “BOOM” is a quick-fire anthem for emphatic recovery and personal revolutions. As its beat rocks, personal demons and toxic relationships recede in the rearview mirror.  The artwork for “BOOM” is written in Braille and designed in a yellow-on-black colorway. For Casey Harris, the band’s keyboardist and Sam Harris’ brother, who was born blind, it is the first physical manifestation of his work that he has been able to experience visually. He has just 10% of his vision.

’BOOM’ is a song about walking away from any unhealthy relationships in your life, with your head held high, says X Ambassadors lead singer/songwriter Sam Harris.   “I’ve had to break off a few of them recently myself, and I was writing all these sad songs because of it. I needed to write one to give me confidence again. To turn my pain into my power.”