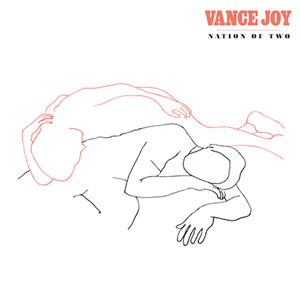 Vance Joy has revealed a release date of February 23rd for his long-awaited second album, Nation of Two. The multi-platinum Australian singer/songwriter has also unveiled the album’s cover art and tracklisting, as well as a brand new song and video from the album, “We’re Going Home.”

Nation of Two marks the follow-up to Vance Joy’s 2014 dream your life away. “We’re Going Home,” is the third song to be unveiled, features a cinematic video, directed by frequent Vance Joy collaborator Mimi Cave (Sylvan Esso, tUnE-yArDs, Jim James), who previously worked with the artist on the video for the alternative hit single “Lay It On Me.” “We’re Going Home” follows that song as well as fan favorite “Like Gold” as the third song available to fans from Nation of Two.

“Nation of Two describes a perfectly self-contained couple,” said Vance Joy, who also illustrated the album’s cover artwork. “Their world beginning and ending at the bed they share, the car they ride in, or any other place where they’re together…the idea that their love for each other gives them their bearings; a point of reference that makes sense of life.”

← Previous Story The GRAMMY Awards Announce Second Round of Performers For The 60th Annual Awards Show!
Next Story → Troye Sivan Releases “My My My!” Music Video