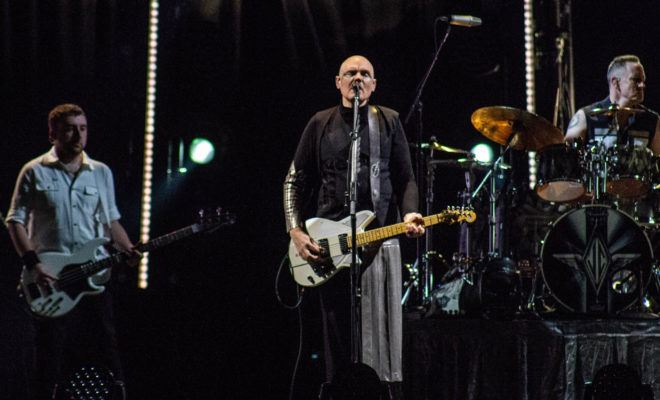 Photos and Review by Jared Stossel
Yesterday evening, an audience of 18,000 Bay Area residents played witness to one of the bigger tours to hit the alternative rock world in the past few years. Armed with their original lineup (with the exception of original bassist D’arcy Wretzsky), The Smashing Pumpkins brought their ‘Shiny and Oh So Bright’ tour to Oracle Arena in Oakland, CA for a three-hour long, thirty-two song set that highlighted the legacy that vocalist/guitarist Billy Corgan and co. have instilled in rock since their introduction to the world with 1991’s Gish.
Corgan, along with guitarist/bassist James Iha, drummer Jimmy Chamberlain, and guitarist Jeff Schroeder (who joined the band in 2007) took the stage for a hit-packed set that spanned the Pumpkins‘ career. While classics like “Mayonnaise”, “Bullet With Butterfly Wings”, “1979”, “Rocket”, and “Cherub Rock” were all played to the delight of everyone in attendance, the band threw in a number of covers, including “Space Oddity” (David Bowie), “Landslide” (Fleetwood Mac), and even “Stairway To Heaven” (Led Zeppelin).
Check out all photos from the band’s headlining set yesterday evening, as well as their set list.
The Smashing Pumpkins Setlist
Mellon Collie and the Infinite Sadness
Disarm
(Billy Corgan acoustic solo)
Play Video
Rocket
Siva
Rhinoceros
Space Oddity (David Bowie cover)
Drown
Zero
The Everlasting Gaze
Stand Inside Your Love
Thirty-Three
Eye
Soma
Blew Away
For Martha
To Sheila
Mayonaise
Porcelina of the Vast Oceans
Landslide (Fleetwood Mac cover)
Tonight, Tonight
Stairway to Heaven (Led Zeppelin cover)
Cherub Rock
1979
Ava Adore
Try, Try, Try
The Beginning Is the End Is the Beginning
Hummer
Today
Bullet With Butterfly Wings
Muzzle
Related Itemsthe smashing pumkins
admin
← Previous Story Slayer Live Photo Gallery + Recap
Next Story → Kesha and The Struts Release Remix of “Body Talks” Along With Music Video