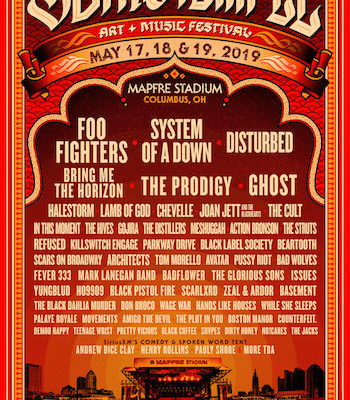 The festival will be headlined by Foo Fighters, System Of A Down and Disturbed. Other notable names include Bring Me The Horizon, The Prodigy, Ghost, Halestorm, Lamb of God, Chevelle, Joan Jett And The Blackhearts, The Cult, and many other chart-topping and up-and-coming music artists. SiriusXM’s Comedy & Spoken Word Tent will include comedy from Andrew Dice Clay, Pauly Shore, and others, as well as a spoken word set from Henry Rollins. The festival will feature three music stages, premium food and beverage selections, art installations, and enhanced onsite experiences.

System Of A Down‘s Shavo Odadjian says, “Although in its inaugural year, Sonic Temple‘s pedigree is proven, and its roots are strong; it made total sense for us to be involved. One could argue that it was a long time coming. We’ll see you all in Columbus this May.”

David Draiman of Disturbed says, “We are honored to share the stage with all of our amazingly talented friends and colleagues at the upcoming Sonic Temple Festival in Columbus, Ohio. Are You Ready?!?!”