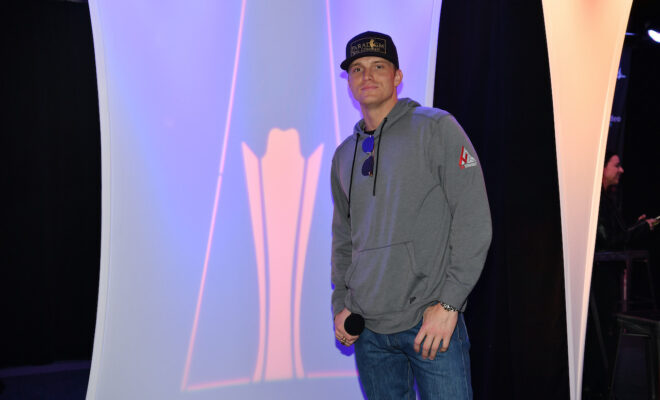 2022 ACM Awards New Male Artist of the Year Parker McCollum is ready to take the show by storm.

“Standing up there and sound checking is just crazy,” he admitted. “I honestly do not know what to say it’s the coolest thing I’ve gotten to do.”

He will be performing his first No. 1 hit, “Pretty Heart,” at Las Vegas’ Allegiant Stadium on Monday night. He said that he is “shaking in his boots” to be performing at such a giant venue with Amazon Prime viewers watching it from home.

“Being on the phone with my parents and telling them even that I’m just going to soundcheck for the ACMs is pretty dang cool,” he added.

This year, Gabby Barrett, Jimmie Allen, and Dolly Parton will be hosting the show.

“Dolly is one of my all-time favorites of course,” Parker McCollum said. “I’m sure that’s a long list of people that have her up there like that. I love Jimmie, he’s been really good to me since I first met him. I’m a big Gabby Barrett fan.”

“Getting to be in the same room as Dolly… that’s hard to have a bad day on something like that,” he concluded.

Will Parker McCollum Reach a Second No. 1?

The newly crowned ACM New Male Artist of the Year Parker McCollum’s new single “To Be Loved By You” is climbing the charts. The Texan may be getting his second No. 1 hit, followed by his first, “Pretty Heart.”

“It’s really cool,” he said of performing his new song live in concert. “[The venue] goes completely black. The lights are timed on to hit with that guitar riff. I just turn around and I have my back to the crowd and the lights hit and I can just feel – I don’t even have to look at it – I can just feel the energy of them waiting on that song the whole night. As a songwriter, there’s no better feeling in the world than to know that they’re waiting on one that you wrote.”