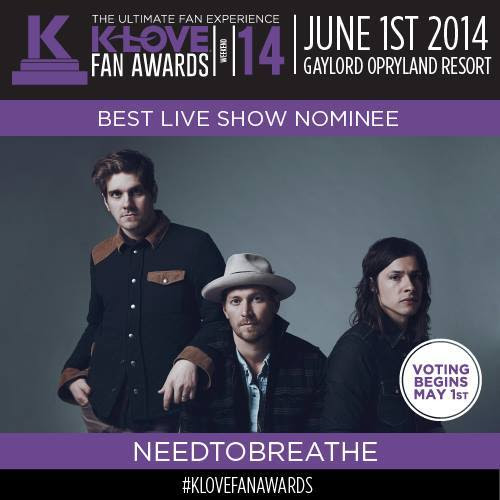 Our next featured band to be nominated at the upcoming 2nd K-LOVE Fan Awards is South Carolina-based alternative rock band NEEDTOBREATHE. Composed of brothers Bear (lead vocals, guitar, piano) and Bo Rinehart (backing vocals, guitar) and friends Seth Bolt (backing vocals, bass) and Joe Stillwell (drums), the band formed in 2002 and recorded several independent extended plays in Bolt’s own studios, Plantation Studios. Said EPs caught the attention of Lava Records owned by Universal Music Group, which signed the band in 2005. They then released four studio albums: Daylight (2006), The Heat (2007), The Outsiders (2009), and The Reckoning (2011) and toured a lot, thus growing quite a strong fanbase, reaching over 400,000 likes on their Facebook Page and almost 200,000 on their Twitter page.

They are now getting ready to release their fourth studio album, Rivers in the Wasteland, which is to release on April 15, 2014 but is already available to listen on the band’s site. This album will be the first they release since Stillwell announced his departure from the band after 13 years in July 2012.

Now, the three friends are nominated for “Best Live Show” at this year’s K-LOVE Fan Awards, but while you wait for voting to be open, you can always catch them on The Ellen DeGeneres Show on April 18th and on The Late Show With David Letterman on April 23rd.

KEEP UP WITH NEEDTOBREATHE:

We did it! Thanks for joining me today and come se