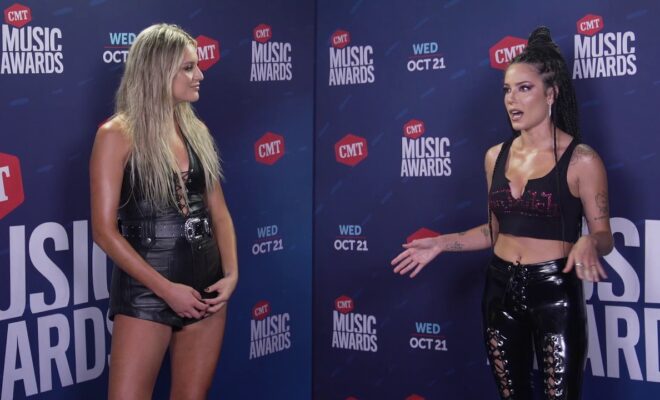 Halsey and Kelsea Ballerini Interview and Behind the Scenes at 2020 CMT Awards: Watch

Halsey and Kelsea Ballerini spoke backstage at the 2020 CMT Awards. The duo performed their collaboration, “The Other Girl,” during the awards show.

The women performed donning somewhat matching black crisscrossed attire. The performance was set at a bar straight out of Coyote Ugly. The pair met in 2018 after Ballerini attended her concert stop in Nashville on her Hopeless Fountain Kingdom Tour. She went backstage, the two became instant friends and the rest is history. The pair performed an episode of CMT Crossroads together prior to their epic performance. They debuted their collaboration during the episode.

“First performance of ‘The Other Girl,'” Halsey exclaimed. “I mean, I can’t believe we get to do this together especially with everything that’s going on in the world. I didn’t think we’d get the chance to perform it. Also, thank you for having me.”

Ballerini revealed that she’s currently working on a collaboration with an unnamed artist. Halsey looked shocked and confirmed that she did not know about her new project until the interview.

Due to COVID-19 health and safety precautions, things worked and looked a lot differently. The set consisted of the bare minimum crew donning PPE equipment while Ballerini and Halsey stayed six feet apart.

Watch the behind the scenes video, below.