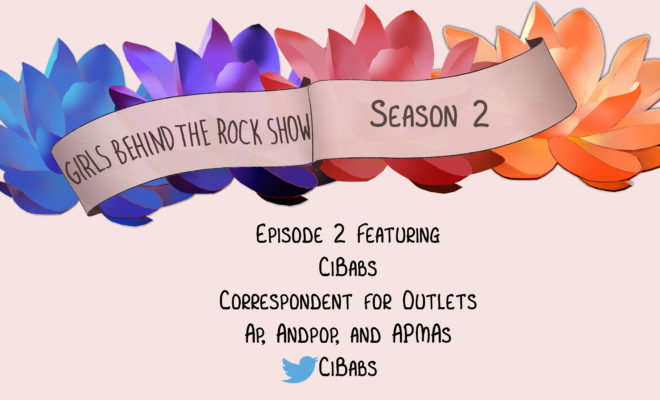 Miss Girls Behind The Rock Show’s chat with CiBabs? Can’t listen?
No worries!

We’ve an excerpt recap about her career right here on Stage Right Secrets for you! Be sure to check out the rest of her podcast at GirlsBehindTheRockShow.com.

How did you get your start with AP?
Well I’ve always been a follower of AP, I’ve always followed them on social media. And I was working before with a website that I really loved, but it wasn’t surrounding the music I really had a passion for – you know alternative, heavy metal, that kinda genre. AP was always just a dream, I always looked at it and see my friend Nick Major on there all the time, and I was like ‘Holy crap that would be really cool if I could do something like that.’ So I tried hitting up Mike Shea a few times, of course he’s one of the busiest people ever, so I didn’t hear back from him right away, but then I eventually got a response because I was putting myself out there in the industry, I was trying to make friends, and eventually Mike got back to me because I was putting myself out ther ein the industry. We emailed a couple times, and I sent him a few audition tapes, and sure enough he offered me a position to be the first girl on APTV.
How did that feel?
It was kind of surreal to be honest, when I read the email I was like ‘this isn’t real no way.’ The moment it really hit me was when they sent my my APTV microphone in the mail.

How did you get started in general in music?
I was 18, in Canada we have this station called Much Music. So when I was 18 years old, they had a competition for the next veejay, growing up in Canada that was our one music channel that we always watched. They had interviewed on live TV, and it was pretty much the dream job for anyone in Canada. I had never done anything like that before, but I just knew I couldn’t play instruments, I couldn’t sing, I couldn’t do anything so I was like ‘you know what I love music, how can I do this?’ So I decided to enter the competition, and I made it to the Top 8 in Canada, which was really awesome I couldn’t believe I made it that far being 18 years old. So after that I realized wow this is what I wanna do, this is it I found my niche, now I know what I really wanna do with my life.
I’m not a person to go to school, that’s just not my style. So I was like, I gotta try something, I gotta put myself out there, and I gotta do something different. So I packed all my bags, and I think I had two suitcases, and from Vancouver B.C. I moved from Toronto, Ontario on Boxing Day, and you guys don’t know what Boxing Day is…. It’s the day after Christmas.
I do actually! Since I’m from Cleveland, I knew a lot of Canadian people growing up.
Okay good! Because Hayden and the Crown guys always make fun of me… like “What the hell is boxing day?” So yeah the day after Christmas.
I literally bought a one way ticket, I didn’t know anyone in Toronto, I didn’t know where I was gonna work, I barely had any money, and I decided that I was going to intern at MTV. That was how I wanted to put myself out there. So I went to MTV and they explained to me that if I wasn’t a student I couldn’t get an internship. So I was really bummed out but I was like “you know what? That can’t be the end of it, I have to try a little harder.” So I sent out a long message to Sheena Snivley. I sent her a long message just explaining what I’d done and what I wanted to do and what I wanted to achieve in my career. And she said “you know what I can tell you’re really passionate about this and I wanna give you a shot, so even though you’re not a student, I’m going to tell them to hire you on as an intern.” So a day later I was in the MTV offices and I got my internship.
Wow!
Yeah that to me was huge, you know that opened so many doors for me and allowed me to make my own videos, and if I wanted to do an interview, they allowed me to use the studios there. Which is completely unreal, you don’t expect that from such a large company.
Right.
So I interviewed a few local Canadian bands from there, just made my own videos. Unfortunately they were letting a lot of people go at this time, so they weren’t hiring any interns. So once my internship was done there, I got a message from the website AndPop which is who I worked for previously. I went and sat down for coffee and they said “I’d love to give you your own YouTube show which is called ‘Making Waves’ you’re going to be interviewing up and coming artists” and from there on, I obviously took it, it meant exposure for myself. So from there on I started interviewing bigger and bigger people for them. It started with T. Mills and Young The Giant and a couple of littler people, and really worked this way up where I was interviewing people like everyone at Warped Tour, and Ellie Goulding, Ed Sheeran and Ariana Grande, and yeah you here those names and you’re like “woah those are really big people, those are pop stars,” right?
Yeah!
But that wasn’t quite where I wanted to be, it wasn’t the genre that I really had a passion for. So that’s when I just messaged Mike and it all went from there.

Amongst the people CiBabs has worked with, she boasts successful interviews with Bert McCracken of The Used, William Beckett of The Academy Is, Brendon Urie of Panic! At The Disco, and more in the alternative rock scene, listen to the podcast to hear more about these in-depth interviews.

And that’s I think one of the biggest complements you could have, someone who doesn’t want it to end.
Yeah definitely… all of this is really surreal for me I’m still living the dream type of thing and I only want things to get better. And it’s crazy to talk about the things that I’ve done because I haven’t realized it yet.

It’s kinda funny you bring that up with Bert because I ask everyone who comes on here about their fanigrl moment, and I feel like you had that “oh my God I’m meeting you now” moment with Burt. Have you had one since then?
That was definitely one of my moments, and considering that was three years ago I haven’t really had another one like that, I’m trying to think of who my other one would be. When I was at the APMAs when I was on the red carpet I got to interview Sum 41. That was really a major thing for me. I don’t even remember what I asked them, what I said because Sum 41 has been with me since I was like 12. They were the first concert I ever went to.