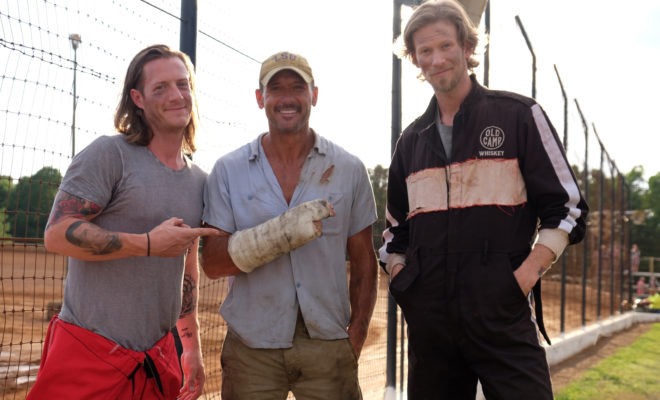 Country superstar duo Florida Georgia Line is pulling out all the stops for their latest video “May We All” taken from their highly anticipated album DIG YOUR ROOTS. The video is a one of a kind mini movie featuring exclusive behind the scenes footage shot in amazing 360° virtual-reality technology. Premiering exclusively on their channel, Monday (8/29) at 8:00 PM ET, the video features the duo acting out roles as a pair of race-car driving brothers and Tim McGraw even makes an appearance!

Fans can get an exclusive behind the scenes look at the video tomorrow on the FGL YouTube channel. Brian Kelley commented on Tim McGraw’s involvement in the video saying, “Working with Tim on the video was absolutely incredible. Watching him show up pretty much in character the whole time, ready as can be and giving advice – his spirit is amazing and we took notes all day. It is really crazy because we grew up on Tim and having him on the song feels like his stamp of approval.”

Tyler Hubbard adds, ““We always like to mix things up and push ourselves to do new things. Going full speed ahead with a video that is a mini-movie with more acting was a challenging and fun ride. We can’t wait for the world to see it!”

The video was directed by award-winning filmmaker TK McKamy with shooting taken place at Tennessee National Racey in Hohenwald,TN and features a great storyline on top of the action packed adventure.

Get amped up for the video’s release next Monday and keep an eye out for exclusive behind the scenes features on the Florida Georgia Line YouTube channel all week long.