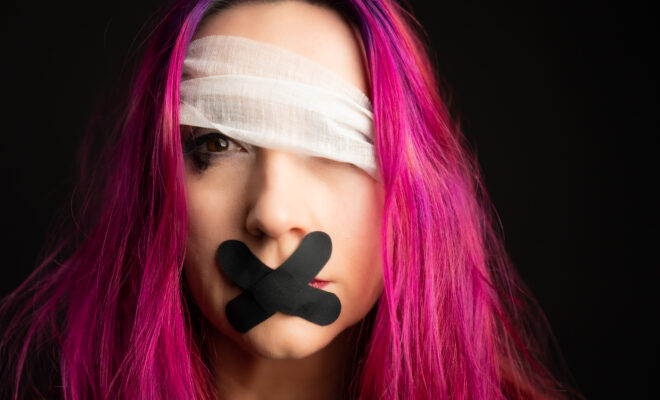 Dana Rexx’s newest single Love Syndrome is a rallying cry for awareness of domestic violence in all its forms.

From intimidation, social isolation and humiliation to psychological abuse, sexual and physical assault, and even to murder, domestic violence remains a big problem in our society.

Every day 137 women are killed by a member of their family. Even when the abuse is not physical, being trapped in a spiral of psychological oppression and constant harassment can cause serious mental scarring and estrangement from family, friends and one’s self.

This oppression is what Dana Rexx chose to portray in the lyric video for her new single “Love Syndrome.” Eyes and mouth covered in bandaids and tape, the singer sings about being “tied down like a criminal” and stopped from getting away from her abuser.

“I’ve had my share of abusive relationships,” the singer shared. “Being bullied into submission, not even realising that my identity was being erased because of someone else’s insecurities.”

Rexx purposefully chose today (March 8) for the release of the new track, for it is International Women’s Day. To commemorate the special day -and women altogether- the singer will be doing a fundraiser on Twitch for a Women’s Rights Charity Organisation that helps victims of domestic violence.

After surviving a sudden and violent loss at a very young age, Dana Rexx found herself rarely fitting in and turned to music as a way to escape reality and the accusations of being different.

Dana, whilst born in Belgium, was raised in Greece, surrounded by mythology and stories of gods and goddesses. Inspirited by fearless heroines like Athena, Hera & Aphrodite, Dana channels this Warrior spirit into her music, exploring the boundaries between tribal rhythms and cinematic pop with an epic edge.

Heavily influenced by cutting-edge artists like Eurythmics, Cher and Lady Gaga, together with cult movements like Rocky Horror and Mad Max, Dana writes about embracing a dark past, overturning outdated norms of society and overcoming rather than succumbing to love and loss. In contrast, her show is big, upbeat and danceable, showing off her colourful nature.

Early on Dana has embraced what it means to be truly independent, not only in life but also in her music career. She oversees all aspects of the creative process, from writing her own songs to styling her look and even producing and editing her own music videos.

Dana is passionate about encouraging people to unveil their inner Warrior by changing how they perceive themselves. She has made it her mission to uplift and empower fans across the globe by creating a world through music, performance and community, where people can connect and express their ideas freely and where society’s archaic ideals are no longer the norm.

Dana is also the host of her own podcast called “Unboxing Women” where she explores why women in the music business are marginalised and discusses the gender gap with her co- host and special guests.

← Previous Story Mickey Guyton Revealed Which Female Country Artist Inspired Her To Pursue Music
Next Story → The Story Behind: ‘Better Together’ By Luke Combs