Our crossroads dreams have come true! Nick Jonas and Thomas Rhett collaborated on the CMT series, CMT Crossroads, this evening (June 24th). The TV show brings together two artists that normally wouldn’t have the chance to perform together for a unique concert. We can’t get over how phenomenal this pair was. The “Jealous” pop singer and the “Die A Happy Man” country singer were the perfect pair because they are both dominating the charts right now.

Although Jonas and Rhett have very different voices, they have a few things in common: catchy lyrics and amazing looks. It’s safe to say the ladies in the crowd agree with us on that one.

The show started off with a rendition of Jonas’ hit “Chains.” It was evident that Rhett could definitely hold his own on a pop song. After “Chains,” the pair performed Rhett’s song “T-shirt.” Commenting on Rhett’s music, Jonas said, “The thing that is so great about your music is that it feels familiar.” Even though Jonas is a pop singer, he grew up in a country background because his father is from South Carolina. “My dad was the musical background of our family. As brothers, we started to create our own voice.” Jonas went on to say that the “biggest obstacle you face is trying to be your own person… taking risks gets you to where you want to be.”

Rhett had plenty of compliments for Jonas as well, stating, “I’ve never been around someone who is such a flawless singer. You make up your own runs in songs you’ve done hundreds of times in concerts.” Jonas had a hard time getting those same compliments from executives at his record label while trying to pursue a solo career. The “Close” singer told Rhett that his label wasn’t sure he could sing falsetto. Jonas worked on his voice to improve the quality of his music. The hard work has definitely paid off. I mean have you heard those high notes on “Jealous”?!

There were a few surprises in store during this episode of CMT Crossroads. Jonas and Rhett collaborated on Jonas’ chart-topping single, “Close” with special guest Danielle Bradbery. The 19-year-old country singer sang Tove Lo’s verses during the performance. In addition to that surprise, John Oates from Hall & Oates performed “Rich Girl” with Jonas and Rhett. 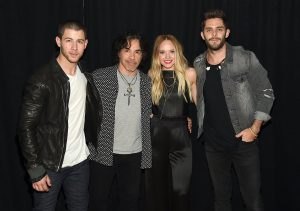 The highlight of the evening was definitely hearing Nick Jonas sing “Die A Happy Man” with Thomas Rhett. “When you sang it, I said ‘this is incredible’ because I’ve never heard another person’s voice on the song before,” the country singer commented on Jonas singing Rhett’s love song about his wife, Lauren Akins. Jonas spoke highly of the song; “It’s one of those songs that almost already feels like a standard. It will be a song people will sing over time, so congrats for writing that.” Warning: Jonas’ falsettos on “Die A Happy Man” may send you into cardiac arrest, so watch at your own risk.

The most personal song on Jonas’ new album, Last Year Was Complicated, released on June 10th, is “Chainsaw.” Jonas told Rhett the backstory on the track. “The day after my ex and I split, everything I looked at reminded me of that person. I thought to tell the truth and lay it all out.” Jonas went on to say that “being respected is the ultimate goal of every artist. I am also aware that comes in baby steps, especially from where I came from with my Disney background.”

After a very personal performance of “Chainsaw” featuring Jonas playing piano, the show ended with an energetic performance of “Jealous.” Rhett and Jonas are definitely now besties. Jonas joked by saying he could see him and Rhett performing a Vegas show 35 years down the road. He concluded the show by saying Rhett is “not only a great guy, but a fantastic performer. Real deal right here.”

We are absolutely obsessed with these two and definitely wouldn’t be opposed to more Nick Jonas and Thomas Rhett collabs in the future. Which performance was your favorite? Tweet us your #CMTCrossroads reactions over at @StageRights!