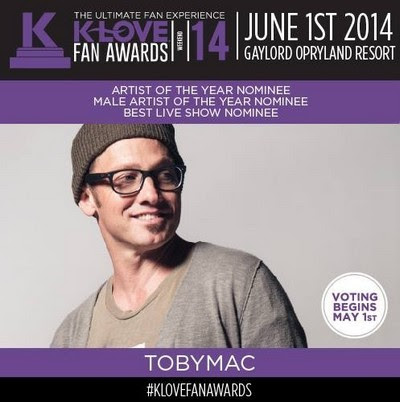 Voting for the K-LOVE Fan Awards is just 3 days away and we thought now would be a good time to introduce (or re-introduce) to you an artist that’s nominated THREE times this year: tobyMac!

Born in 1964, Toby McKeehan made up one third of the Christian rap trio dc Talk for the first thirteen years of his career, starting in 1987. After the trio announced their hiatus in 2000, tobyMac started a solo career and has since sold over 11 million albums and won 6 GRAMMY® Awards.

It all started with his very first solo album, Momentum, released in 2001. Mixing pop, rock, soul and hip-hop, the debut album received five Dove Awards and one Grammy nomination. In the following years, tobyMac released three other full albums which have all been certified Gold: Welcome to Diverse City (2004), Portable Sounds (2007) and Tonight (2010), as well as remixes of said albums. A lot of his songs, including “Extreme Days,” “Get This Party Started,” “Burn For You” and “Atmosphere” were then actively used in promos for hit television shows, movies, sports programming and commercials. 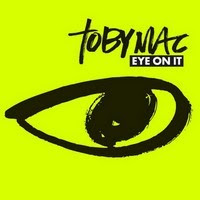 In 2012, tobyMac released Eye on It, his sixth full studio album. The album debuted as No. 1 on the Billboard 200 chart, making it the third Christian album with a No. 1 debut on Billboard, and the first since 1997. The album was highly praised by critics and received the award for Best Contemporary Christian Music Album during the 2013 GRAMMYs.

Faithful to what he loves doing, tobyMac is currently on tour across the US to promote the album. “The most amazing feeling for any artist/songwriter is to take a song that came from your heart and have the audience sing every word along with you,” he shared on his website about performing live. “That is a sweet humbling moment.”

This year, tobyMac is nominated in three categories at the K-LOVE Fan Awards: Artist of The Year -which he won in 2013-, Male Artist Of The Year and Best Live Show.

KEEP UP WITH TOBYMAC: