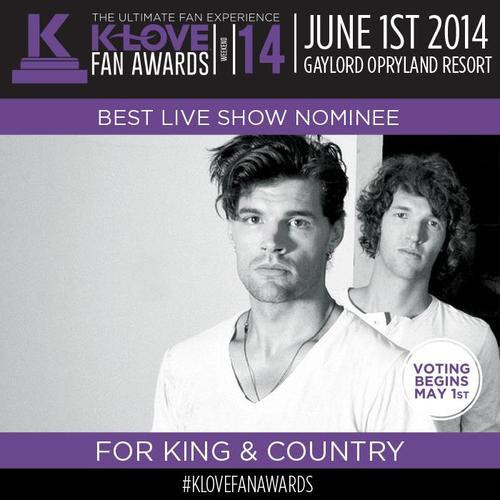 As we were telling you earlier this week, the K-LOVE Fan Awards are just around the corner. For the occasion this year, the Grand Ole OPRY in Nashville, TN will welcome a lot of Australia-born artists and bands, including our new featured band: for KING & COUNTRY.

Formerly known as Joel & Luke, for KING & COUNTRY is a Christian pop duo formed in 2007 by Sydney-born brothers Joel & Luke Smallbone after their move to Nashville in 1991. The brothers signed with Warner Music Group in 2009 and released their debut record Crave in 2012, which peaked at No. 2 on the iTunes top Christian & Gospel albums. The duo was then named by Billboard as one of the “New Artists To Watch” for 2012. Joel and Luke are currently working on a new studio album that is expected to be released at the end of the year.

The brothers, who won the “Breakthrough Artist of the Year” award at last year’s event, are nominated for “Best Live Show” this year. See why for yourself!

KEEP UP WITH for KING & COUNTRY: