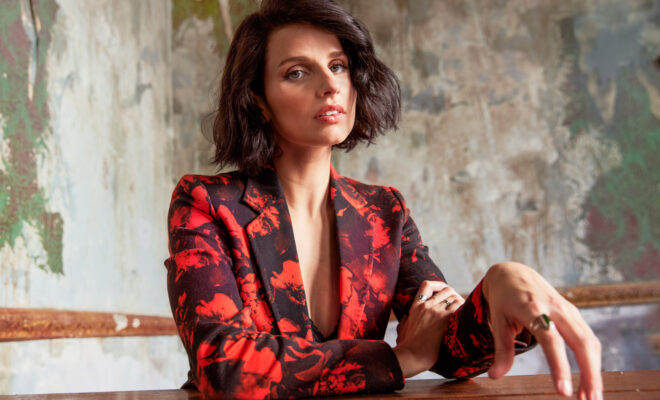 Australian singer/guitarist Imogen Clark is back with a new EP, Bastards.

Despite the myriad challenges that 2020 brought to the music industry, Imogen Clark had a banner year – she released a critically acclaimed EP The Making Of Me, played a sold-out livestream concert series, performed back-to-back sold-out Sydney launch shows in September, dropped a nostalgic Christmas single, and wrapped it all up with an epic First Annual Holiday Hootenanny gig with her musical mates – including Montaigne, Jack Moffitt (The Preatures), Lindsay McDougall (Frenzal Rhomb) and more.

The 25-year-old is now kicking off 2021 with a brand new EP, Bastards, and the singer told us all about it in an exclusive interview!

Stage Right Secrets | Congrats on your EP, we loved it! First of all, let’s talk about your latest single, “First Class Man”? Can you tell us a little bit about the creative process behind the song?

Imogen Clark | “First Class Man” was the hardest song I’ve ever had to write. Two years ago, I lost my mentor Glen Hannah to depression. He was a brilliant musician here in Australia who I met when I was a little kid just starting out playing in bars, and he was so important to helping me become the musician and the woman I am today. He was my musical director and guitarist and was there for so many milestones. After he passed away, I felt so raw and had so much anguish and conflicted feelings I needed to get out, but I just couldn’t do it on my own. A mutual songwriter friend of mine connected me with one of my idols, Colin Hay from Men at Work, and I felt like I could trust him to help me process these emotions into a song. His vocal on the track is so haunting, it really took it to another place, and it’s such a special song to me, to commemorate Glen and have a way to publicly pay tribute to someone who meant so much to me.

You’ve already released music videos for “Forget About London” and “Never This Time.” Can we expect a visual for “First Class Man”, too? How involved were you in the concept and realization of the first two?

“First Class Man” is such a delicate subject matter, it seemed like it would be impossible to portray visually in a tasteful and respectful way, so we decided just to do the lyric video. I love making music videos. So much of being a musician is about finding new ways to challenge myself, and the videos always give me opportunities there. I’ve had long Disney princess kind of hair for my whole adult life, and it was beginning to feel like it was literally and figuratively weighing me down, so we decided to chop it off in the “Forget About London” video, like it was a rebirth after a breakup. Stuff like that, and the steamy scenes with Dan, our lovely leading man, and the cathartic smashing up the city of London, it was all new stuff for me. “Never This Time” was a pretty light workload for me. I loved the Sliding Doors concept of the guy going on a bender in one timeline and getting sober in the other, and that meant I wasn’t so involved in the story scenes, just rocking out with the band, which is always fun – even if you’re miming.

You worked with some pretty amazing collaborators on your EP. How did these collaborations come about?

Nothing is more validating to me as a songwriter than the calibre of people who have been willing to contribute to my songs in the studio. One of the reasons behind tracking the record in LA was that there is such a wide variety of incredible musicians at your fingertips. I’d gotten together with Mike Bloom, who I first saw playing with Jenny Lewis years ago, to make some demos in 2019. We clicked so well, and the dynamic between him and I and the engineer Will Golden was so productive that by the end of our “demo” sessions we had the skeleton of my last EP “The Making of Me” already in the can. When we came back into the studio last January, we really let our imaginations run wild. We really needed powerhouse rock drums on a track like ‘Bastards’. Who’s the best rock drummer alive? Pete Thomas from Elvis Costello and the Imposters. Mike had worked with Pete and asked him, he dug the songs and came on board. When we were in pre-production, we were always talking references for different parts of songs. The keyboard references were always to parts Benmont Tench had played, especially on Tom Petty & The Heartbreakers records. So rather than get some session dude to come in and pretend to be Benmont Tench, we asked the actual Benmont Tench, who came in and played like absolute magic. Jason Boesel is both a writer and a player on this record. I loved his drumming with Rilo Kiley and the songs he had written with Mandy Moore for her latest record, and he really brought that dirty, indie vibe to the songs he played on. Jason and I wrote “Never This Time” with Taylor Goldsmith, the frontman of my favourite band Dawes. Like with Colin and “First Class Man”, this was a subject I hadn’t had the nerve to write about on my own – my family’s history of abusive and self-destructive behaviour. I think being with musicians who, even though they didn’t know it, had been such a close part of my life for so many years, and been with me in so many tough times, made it easier to share these feelings and get them into a song. Every day I got up to work on this record, both in LA or later when we were recording over Zoom during the pandemic, it was the anticipation of working with these incredible collaborators that most excited me. Hearing the amazing ideas my songs had sparked in them was such an exhilarating feeling.

How did you go about choosing the sequencing? Were there tracks that didn’t make the EP that you wish you could have included?

I wrote around 100 songs over the last few years, and that was where the tracks on both “Bastards” and my last EP “The Making of Me” were drawn from. We spent a lot of time culling the lists down, going back and forth over the right balance of different kinds of songs and making sure we had the right ones in the mix before we started recording. We were determined to get the most out of our time in the studio and not waste any time on songs that might not make it on. Even while we were recording, we were thinking about the flow of the EP, and sometimes making a decision like the abrupt ending of “First Class Man” was partly about how it would transition into the cold vocal open on “Bastards”. We wanted to start with the sweeter sounding songs and then get rawer and darker as the record went on, with the most emotionally intense songs “Never This Time” and “First Class Man” back to back in the middle, before finishing off with the catharsis of “Bastards”. Even though an EP is only six tracks, it was so important to me that the experience of listening to it in order as a record took people on a journey and was a satisfying experience emotionally.