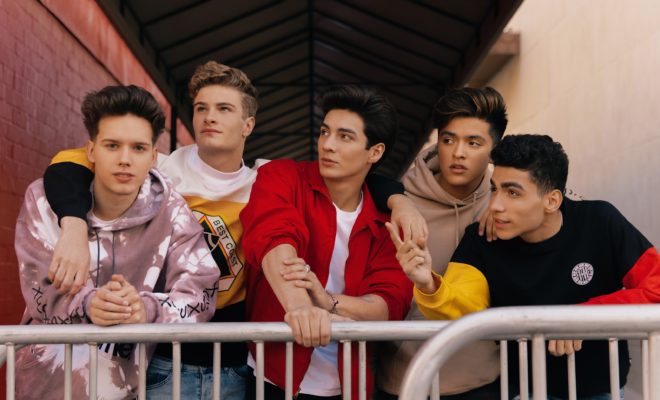 Exclusive: In Real Life on Handling Fame and Friendship

You witnessed their formation before your very eyes on ABC’s Boy Band and now less than a year later, Sergio Calderon, Michael Conor, Chance Perez, Andrew Ramos and Brady Tutton are gearing up to take over the world.

In Real Life will be the special guests on this summer’s American Idol Live tour (it’s like all our ABC reality dreams come true) and they’ve already got their first headlining tour set for the fall. On top of all that, the boys’ next single “Tonight Belongs To You” will be released in July. Their current single “How Badly” is an English/Spanish hit that you’ll find yourself humming all day. There is no doubt In Real Life will be part of our lives for a very long time!

SRS: Congratulations on “How Badly”! Total bop! How did recording this song come about?

Brady: We finished the song in like 5 hours. I think that when a song naturally fits with an artist it becomes a lot easier and more natural to record.

Sergio: We’ve incorporated some Spanish into a couple of our upcoming songs. It’s fun being able to expand into other styles of music within our group. We feel like we aren’t limited by one genre.

SRS: You have three singles out, so the question looms: Will there be an EP or LP coming out soon?

Michael: We’re a new group, so with the way the music business has been going, if we put out a full length project the average listener probably wouldn’t listen to the whole thing. With singles it’s easy, you can hear one song and determine if you want to hear more. It also lets us give fans a taste of what we’re working towards in the long run. We’re hoping to put out a full body of work at some point though.

SRS: On ABC’s Boy Band, three celebrity “architects” judged/mentored you through the series. Have the likes of Nick Carter, Emma Bunton or Timbaland kept in touch? What was the best advice you received on the show?

Chance: Timbaland told me to know my worth and to always follow my gut. I think that piece of advice really stuck with me.

SRS: Now what advice would you give to someone who is trying out for any reality show? And what is something the public wouldn’t really know about being on reality TV?

Sergio: If there’s anyone wanting to try out for a reality show, I think the best advice I could give is to be yourself. Sometimes I felt like I had to act a certain way because I was on TV, but at the end of the day the viewers are going to connect with who you are, not who you think they want you to be.

SRS: We recently saw you guys doing a lie detector test during an interview and speed dating a fan! Very different from life a year ago. How are you boys handling your new found fame? And what keeps you grounded?

Brady: It’s been overwhelming at times, but I think we’re all really grateful for every experience. What keeps me grounded is knowing that we haven’t nearly reached our full potential. We’re not even a year old as a band. We have so much to learn and so much to do in the next couple years in order to keep pursuing this journey, and we have a lot of evolving to do. I think that as a group, we are able to stay grounded with that in mind.

SRS: What do you think is the key to being friends while in a boy band?

Drew: The biggest part is enjoying what you do. We’ve grown with each other, all of our lives changed last summer when we were on Boy Band, that’s something you can’t really replicate. After going through an experience like that together, we became so close; we’re a team.

SRS: Are there any misconceptions about boy bands you hope to change?

Michael: I think a popular misconception about Boy Bands is that our music is only for teenage girls, but we want our fans to know that we make music for everyone. We’re a group of guys, and we make music that we like and that we’d want to listen to, so that’s really important to us.