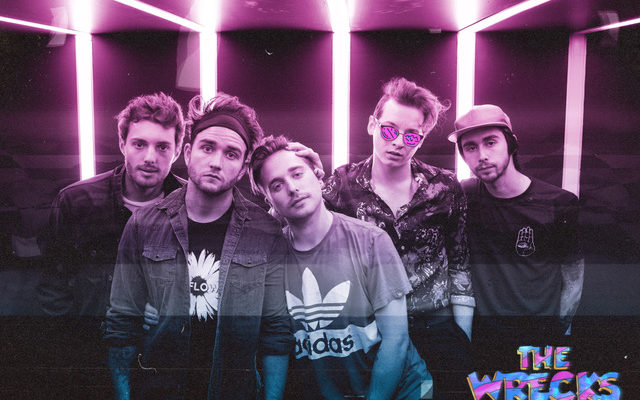 The Wrecks Release “Freaking Out”

Lead single “Freaking Out” offers up a perfect example of the magic that comes from capturing a song in the moment. Written with Tom Peyton (Panic! At the Disco, X Ambassadors), the track is an absolute earworm, with semi-spoken verses that give way to a soaring chorus just begging for an audience sing-along.

That raw, electrifying honesty has defined The Wrecks from the start, and it’s the heart and soul of the LA band’s exhilarating debut LP, due out later this year via Big Noise. Recorded primarily in an old barn-turned-studio in western New York, the album pushes The Wrecks’ sound to new heights, infusing the infectious hooks and explosive arrangements of their early EPs with the manic energy and undeniable charisma of their pulse-pounding live shows. The band produced most of the album themselves over the course of three months of intensive studio work and self-reflection, and the end result is their most ambitious release yet, a taut, searing, radio-ready collection that blends punk snarl, pop appeal, and indie adventurousness.

The band recorded their first EP, 2016’s ‘We Are The Wrecks,’ soon after forming, and they captured the entire collection in just three days. Lead single “Favorite Liar” became a runaway hit, spending a dozen weeks on Sirius XM’s Alt-18 Countdown and racking up more than 15 million streams on Spotify alone. The EP earned the band dates with the likes of Paramore and The Struts in addition to landing them their own sold-out headline run and festival slots from BottleRock to Lollapalooza. The group’s 2018 follow-up, ‘Panic Vertigo,’ earned similar acclaim, with Ones To Watch hailing the four-piece as “indie rock’s best kept-secret” and Billboard calling them “as authentic and honest as possible.”

“I wanted to write a song about my first experience with psychedelics because it was life-changing,” Anderson says of the song, “but I didn’t want to succumb to all the clichés that come with ‘psychedelic’ production. I wanted something straightforward and fun and, most of all, honest.”