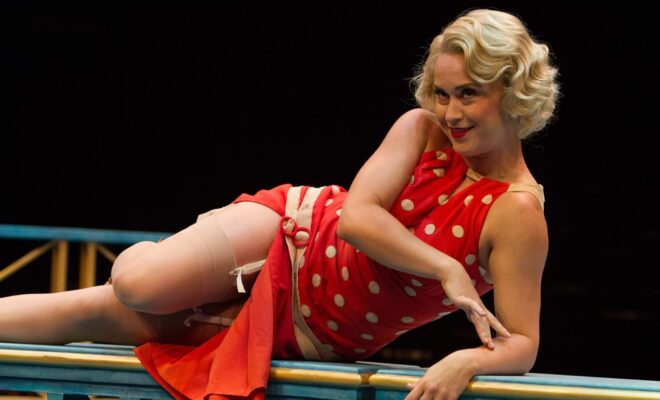 Exclusive Q&A: Holly Ann Butler on Her Debut 54 Below Show

Holly Ann Butler just took over our Instagram and is taking over our hearts. Butler is making her 54 Below debut on May 8 and we got to chat with this Broadway babe on her experience as an understudy, swing and standby!

Stage Right Secrets | Do you remember the first time you went to 54 Below?

Holly Ann Butler | I think the first time I went to 54 Below was to see my incredible friend Allison Guinn do her solo show about her Grandma. She sang, told stories, and played the autoharp. It was incredible.

What do you wish more people knew about understudies?

That we’re superheroes! We frequently go on without much notice (and sometimes with very little rehearsal) and still have to carry the show. I know sometimes people go see shows to see a particular star or celebrity, but understudies bring their own flair to the role. So when you see that “at this performance” slip in your playbill, I want people to be excited rather than disappointed.

You’re currently in Come From Away as a standby. For those who don’t know what’s the difference between being an understudy, a standby, and a swing?

Do you have a favorite standby or understudy story to share?

I have lots of great understudy stories, but if you want to hear them, you’ll have to come to my show at 54 Below on May 8th!

I have to say I am a big Nick Jonas fan and saw How to Succeed multiple times on Broadway. Is being in the show just as fun as watching it?

How to Succeed was one of my favorite shows ever. The cast was awesome and the show was really fun to do – so high energy and zany. I really miss that one… even if my body doesn’t. That choreo was no joke! 😂

What advice would you give to someone who says it’s their dream to be on Broadway?

I always tell people two things: 1. If you really want this, don’t give up. There are a thousand ways to “make it” in this business, and if you really love it, it’ll happen. 2. BE NICE!!! You’re not going to love every person you meet or work with, but since everyone knows everyone in this biz, being pleasant to be around goes a long way. People want to keep working with folks who are easy to work with.

Do you have any pre-show rituals?

My pre-show rituals depend on the show. If it’s a big dance show, I have a warmup I do. I really enjoy working out on show days so I’m already warm and ready to go by showtime. I also do my vocal warmup at home before I leave my house. And lastly, I usually message my partner, L. Steven Taylor, and wish him a good show (he’s in Lion King).

What are your dressing room necessities?

My dressing room necessities are hairspray, deodorant, photos of the people I love, and a small stuffed penguin my partner gave me. I also usually have a fluffy floor mat and a giant Stitch onesie for when I want to nap between shows.

What do you think the future of live theatre is going to look like?

I really enjoy the movement theatre has been making to be more inclusive, and I hope we continue to follow that path. I love that we’re starting to see more shows written by black and female voices, and I love seeing more people onstage from all abilities, races, and gender presentations. I hope the future of live theatre keeps moving forward so everyone has a seat at the table.