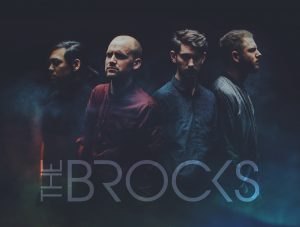 [Q1] Tell me a little bit about how the band started?

Dane Brock– My brother Grant and I started playing music together back when the band name made more sense. Ha ha. We each started writing independently and truly loved each other’s songs and decided to form a band. Grant knew Christian (drums) and I knew Morgan (guitar). We all knew Ryan (bass) from his engineering work locally and added him later. Grant doesn’t perform with us but still writes with the band.

Christian: We dipped in and out of a few different genres before Dane bought a Nord Lead 2x. It was all synths from there on out. We all love the fullness and production quality of electronic music but also wanted to keep the magic of live performance so we ended with an eclectic mix of both.
Dane: I think at one time or another the band has performed post-rock, indie-folk, alternative and dance and we’ve loved all of it. So we took our time to make sure we settled in a genre that we felt would be flexible and allow us to grow creatively. And I think indie-electronic really lets us do a lot of different cool things while staying relevant.

[Q3] Congratulations on your commercial placement for the Mountain Dew Commercial….How Stoked were you when you found out?

Morgan: It was very unexpected. The director of the short they used for the commercial happened to be living in Utah, and somehow heard a demo of an unreleased song. We only had a rough demo and had performed it a handful of times.
Christian: Dane had never actually had Mountain Dew before so we celebrated by cracking open a few 2-liters.

[Q4] How did your collaboration with Kaskade come about?

Christian : Kaskade is actually pretty involved in the Provo music scene and has featured several local artists on his songs. He heard a demo of our song Summer Nights while he was working on the soundtrack for the EDC documentary “Under the Electric Sky” and wanted to collaborate on it for the title track. We showed him some of our other stuff and he agreed to produce it! Definitely not a bad guy to have on the team.

[Q5] If you could collaborate with any artist – dead or alive – who would it be?

Ryan: Kanye West, because I need to see it to believe it. But really Miike Snow, Tame Impala, anyone else in that vein. Really anyone that is making interesting sort of hybrid-electronic music.
Dane: I’ve tweeted at Michael Penn a couple times to get help with lyrics because i love his “No Myth” song so much but I’ve never received a response.
[Q6] Individually, who would you say is your biggest musical inspiration?

Dane: Hands down my brother. His melodies and musical ideas have always been amazing to me and have really inspired and pushed me as a songwriter.
Christian: Tough question. The ones that have stayed with me are probably Stevie Nicks and Brian Wilson
Morgan: Thom Yorke.
Ryan: The Beatles started it all for me

[Q7] Do you have any pre-show rituals?

Christian – Dane does a really embarrassing vocal exercise while the rest of us do calisthenics.

Dane– Usually the band just tries to hide me from others backstage so they don’t see my vocal warm up. I also always have a white cherry gatorade..

[Q8] What current projects are you working on?
and
[Q9] Along with projects, what can we expect from future music
Ryan: Releases! We have a bunch of music we’ve been working on releasing. We’re putting together art, videos, and everything else that goes along with the songs. We plan on putting out a few more singles and music videos before the end of the year.